The S&P 500 and the New England Patriots

In sports, an undefeated season is extremely rare with only three teams in the NFL accomplishing it since 1932 with the New England Patriots being the last in 2007.  Like in sports its extremely rare for the stock market to have 12 consecutive months of positive returns but that is precisely what occurred in 2017. 2017 will mark the first time that S&P 500 accomplished the feat.

The S&P 500 currently is on a roll looking a lot like a Tom Brady led New England Patriots. However, according to some, a Patriots Super Bowl win is bearish for the stock market. Don’t worry I will not include this indicator in my future analysis.

J2 Capital has been calling for a bull market and higher equity prices since August 2016.  Many were caught and surprised by the strength of the market. J2 Capital was able to model for much higher corporate earnings than what many were expecting and this without the tax reform included in our analysis.  We also argued that old rules around valuations may not apply, another correct assumption as the market has thrown out the old fundamental playbook.

As discussed in previous quarterly updates, we are in a positive feedback loop, otherwise known as momentum.

The S&P 500 is currently working on being up an incredible 15 out of the last 15 months!  We are now seeing many metrics and technical indicators reaching levels that haven’t been seen in many years if not decades or ever. It is just not a U.S. market story either as emerging markets, after many years of idling around have finally sprung to life. The same is seen across the globe as the feeling of a global economic upswing has raised animal spirits to a level not seen since 1999.

Throughout 2016 and 2017 J2 Capital believed that growth would win over value. As shown below growth, regardless of market cap handily beat value stocks. 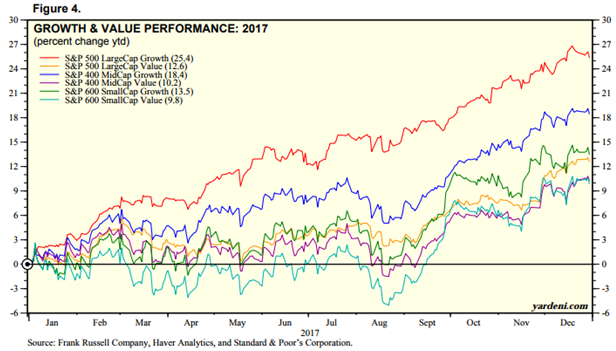 Investor enthusiasm and the red-hot market is due to a few things.  First, earnings started to come in a lot better than what many thought. J2 Capital was early in telling the earnings rebound story in 2016, and it was a significant theme in us calling for a bull market continuation. Additionally, many need to understand that markets are liquidity driven. Global liquidity has done nothing but gone up. As the U.S. reins in their QE programs, many other nations have continued their own (figure 1). 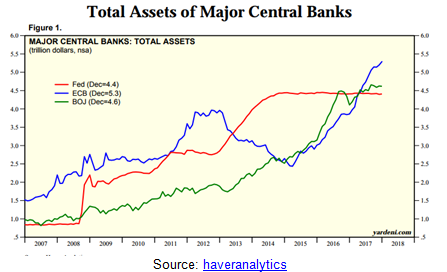 In liquidity driven markets things like P/E ratios that fundamental managers look at don’t matter as much. Eventually, the tide will go out as the U.S. and other nations cut their Q.E. programs and switch to (Quantitative Tapering). Asset purchases by global central banks are forecasted to shrink starting this year. 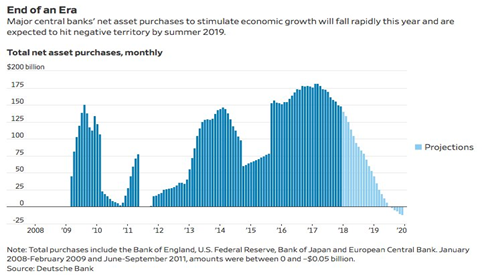 With that as our backdrop, our short-term view is a little more cloudy and little less enthusiastic, but hopefully only in the short term.  Where others were concerned about earnings and valuations in early 2017, J2 had great vindication in the bull market thesis. Our 2018 outlook feels neutral at the current moment given the significant run-up in prices. That is not to say we still don’t see a lot of great individual setups in the market, we do! While we do not want to step away from this excellent momentum market, we do want to approach it a little more methodical.

Our number one most significant concern here in the next month revolves around earnings season. So many stocks have rallied so much that I question how much a lift they can get from continued positive earnings announcements and guidance. We have been arguing for a new valuation paradigm, but frankly,

we are wondering what the limits to this are in the short term. Sentiment seems a little too enthusiastic at present. There are no bearish opinions to be found now.

The rally that has occurred in the past 15 months was built upon on analysts getting earnings expectations wrong. The global excess liquidity I touched upon earlier provided the accelerate once those earnings came in better.

We now have the reverse, now where expectations are rising. The current S&P 500 growth rate for 2018 has increased from 12.3% to 18.6%.  Additionally, thus far 68% of companies have beaten EPS estimates which is below the five-year average.  I do not like the fact that earnings expectations are now rising as it makes the hurdle that much higher for stocks to leap over. 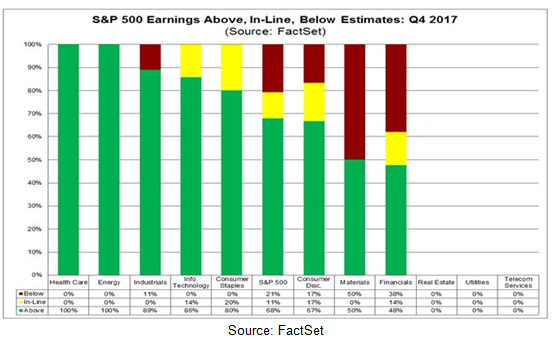 I have other questions I am left with as we head through 2018 with no current feel with how they may turn out.

We are very uncertain what is going to happen with interest rates and bonds as we move through this year. The market at times is showing its hand that it believes there may be upward pressure in inflation expectations thus affecting bond yields.   I can make an argument for higher inflation, but I can also see inflation and interest rates meandering throughout the year much as they have been for several months. A ceiling on inflation has been covered by me previously and as I wrote, has to do with demographics, debt, and technological advancements which are inherently deflationary.

Currently, we are getting a hefty dose of asset price inflation which if not monitored may eventually someday lead to a significant break in stocks that would occur suddenly. A healthy equity pause or pullback soon would not be the worse situation. At its current rate  of change in 2018, the market is on pace to advance 80% this year! I do not need to tell you how unsustainable and unrealistic that is.

Where to from here?

We believe that given the euphoric rise with no pullback along with exuberant enthusiasm raises risks in the short term higher than we have seen in years.  A pause would be healthy.  Straight line advances in a 30-degree upward angle almost never stick no matter how good things are. Should stocks not pause, we would expect to see many months of gains given back very quickly.

Longer term we still like the bull market and our continuing thesis of growth over value. We believe that a new long-term bull market is underway in disruptive technologies and medical advancements.

As we have noted in the past year, advisors risk their clients being left out by ignoring this part of the market.  We would advise taking advantage of any dips occurring in tech and growth stocks this year as a way to diversify your clients.

J2 Risk Managed RS Leaders is an excellent vehicle to gain exposure to these areas of the market and is an excellent complement to other managed strategies on the Regal platform.