Please increase my risk. On second thought, forget it. 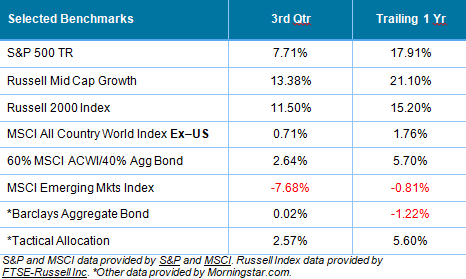 It’s a lot of fun writing these quarterly updates at times. What you plan to discuss can all be tossed out in a matter of days. For instance, I had planned to discuss how well momentum and growth stocks were continuing to do compared to just about every other asset class investment option. This market has been a J2 RS Leaders story since August 2016. All other strategies, like most asset allocation strategies, have had a tough go due to how narrow the market has been.

As an RIA, I understand what is going through clients’ minds. I also have the advantage of talking to the many advisors we do work for. The conversations at the end of September were all very similar. That dreaded disease of FOMO (fear of missing out) had officially plagued the average investor. Like a world event, this disease seemed to hit everyone almost the same week.

Ending the third quarter, the typical asset allocation portfolio was up less than 5% for the year, and closer to low single digits. With two-thirds of client investment selections flat to down for the year, clients wondered if they were missing out. Even financial sites were helping you navigate this conversation. Take for example a classic diversified 60/40 fund, such as the Fidelity 2025 retirement fund. As of the end of September, this fund was up only 2.52%. Positive for sure, but nowhere near the 10% to 15% year to date return that most growth indexes were up. The S&P 500, as noted above, was up close to 8% year to date at September’s end. Many of us understand that clients cannot be 100% invested in one area (index) of the market for the simple fact that they cannot handle the risk once the tide turns. A diversified account allows you to better steady your clients and reduce volatility to allow them a chance to see their investment plan through. Unfortunately, since we are human, we are always plagued with either fear or greed. Blame it on our caveman relatives, I guess.

With the likes of the (Facebook, Amazon, Apple, Netflix, Microsoft, Google) stocks hitting all-time highs—well, minus Facebook—which we wrote about in our 1st quarter 2018 update where we argued it would be a lousy investment going forward due to future earnings destruction. These stocks were the engine that drove those dreaded career-killing indexes like the S&P 500 and the Nasdaq higher. Clients wanted a piece of the action, which almost always seems to hit a fever pitch at the end of the cycle.

What those clients were missing is exactly how those indexes were hitting all-time highs. If they had looked under the hood, they would have seen a market that was in real trouble. The average value-oriented dividend-paying stock was up just 3%. Many sectors were flat to negative. Heading into October the average stock in the S&P 500 was below its 50-day moving average, and many were even below their 200-day. How can that be? Easy: it’s the math behind the index construction, being either market cap or price weighted. In short, the largest companies drive the bus here, with many of those companies being the technology FAANMG-type stocks.

…Fast forward to October 11: My, how fast things change. Let’s go back to the selected benchmark table and see where we stand now, just two trading weeks into the fourth quarter.

…And just like that, all the calls and FOMO stop. It appears that the antibiotic for FOMO is simply its opposite, which really means the fear of losing money.

Where to from here? Our current market thoughts

Volatility this year compared to recent years has picked up. The volatility ramp and subsequent large quick market drops are on the rise. 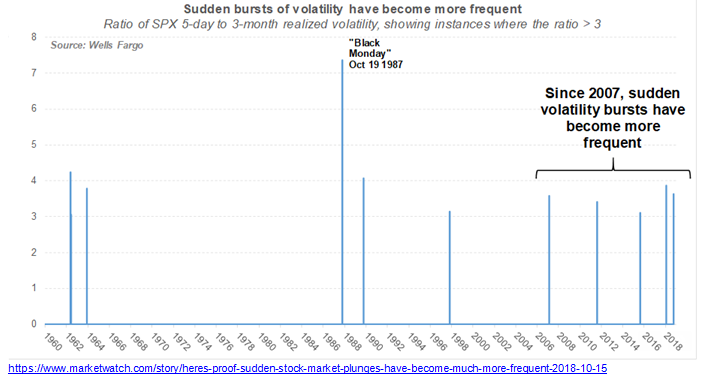 As of this writing, on October 16, we do not view the recent drop as providing a good entry point yet. This very well could be a buyable low, but I am not viewing it as a durable low that is of low risk. Our RCI Indicator, which gauges the general market (S&P 500), dipped down 23.75, very close to our bear market warning level of 17. I drew a blue line (see below) for every other instance of the indicator dropping this low but not signaling a bear market. As you can see, almost every instance was a great buyable low, except in 2015 when the rally rolled over and headed lower. That should be enough to convince me to add risk here, but there are a few things I would like to see resolved before I am convinced the coast is clear. 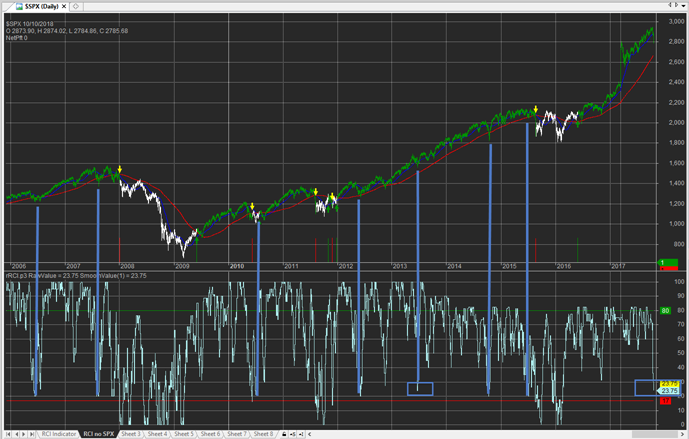 For starters, there were many stats and discussions online of how oversold the market had become on the recent drop. I think it’s important to separate out stats meant for day traders and those for longer-term investors. Below is a chart of the percentage of S&P 500 stocks that are on a buy signal. Note that the current reading is 44%. What’s interesting is that this is higher than the February drop that took place. Great long-term buy signals come when the market gets washed out below 30. We have a negative divergence here until we see market strength that is followed up on. 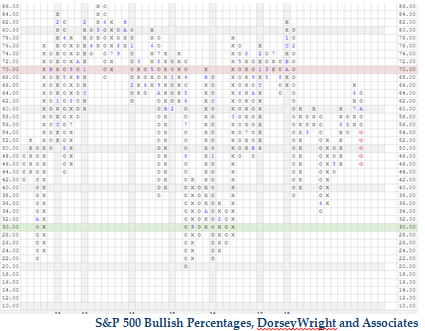 There also seems to be a great debate over how cheap or expensive the market currently is. The most basic and common method of determining that is the standby P/E ratio, or price to earnings ratio. That ratio now stands at 22.5x—historically a little rich, though those who have read my past missives know that I have long argued for a higher-than-historical P/E ratio due to disruptive tech forces and the earnings being derived from them. But this assumes that economic growth continues unabated, which I now have serious doubts about. More on that in the next section. 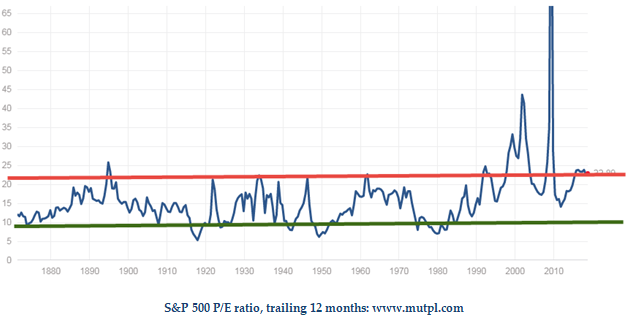 The current price to sales of the S&P 500 also seems to be fully valued here. 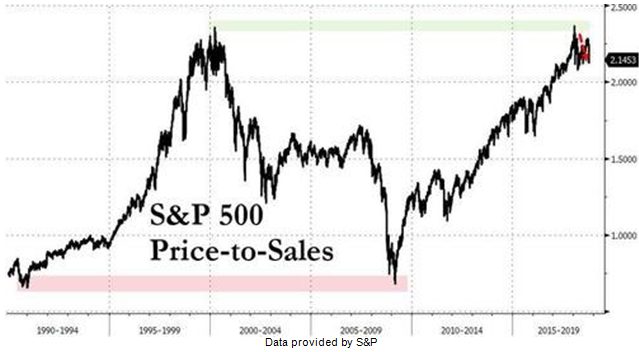 Earnings on deck: Likely, what will make or break this market will be earnings coming out over the next couple of weeks. The guidance will be watched especially closely. It is my belief that we saw peak earnings in the second quarter of 2018. Should that be true, then the whole game changes. We are already seeing some early negative comments about future growth prospects. A few of the financials reported last Friday mentioned slowing loan growth. We also heard a litany of reasons from PPG industries on why they are lowering guidance. Should earnings guidance be lowered, that would be a negative, as the delta will have changed. I keep wondering, how we can be in such a wonderful economy with auto and home sales in the tank? Yes, this is an interest rate story, as they have moved up, but these two sectors are still a large portion of the economy, and housing is where the average American has all their net worth!

In my estimation, it’s highly likely that the combination of the Trump tax cuts along with deregulation and corporate buybacks stimulated (juiced) earnings and thus the economy in the short term. Just how exactly is the US getting along so well, while every other global economy is turning down? A true miracle, I must say. It is for these reasons that I theorize that the economy will slow down a little. Again, it’s about trajectory here and not good versus great. It’s slower, and that’s all that needs to happen for risk to be brought in.

On that note, should I be correct, then we should see interest rates back down a little, or at least stop rising sharply. We would also come to see a more dovish fed that starts walking back the number of rate increases it sees happening. I’ll be watching earnings and the economic data to either confirm or disprove this thesis.

We believe that for the market to be back in an up- trend and out of a high-risk environment, we need to see a couple strong days in the market that put the RCI Indicator above 80. That would suggest to us that institutions feel comfortable enough with the market to be engaged again. Good earnings guidance will give cover to the risk-on trade being back in style. I believe we will find out by the end of October what kind of market we are in. For now, J2 Capital is holding higher-than-normal levels of cash across our models, waiting to see what the market’s next move is.