A Bull Market with Anomalies

With markets caught in a positive feedback loop and going up every month, it makes writing my quarterly letters much easier as apparently I can just copy and paste from last quarters update. So here yet again we start another quarterly newsletter like the past two stating that the U.S. stock markets posted another solid quarter and with the S&P 500 is now up 14.24% year-to-date.

International and emerging markets have jumped into the global economic upswing and are continuing to assert their relative strength over the U.S. markets during the 3rd quarter just like it ended the 2nd quarter.

The 3rd reminder in a year, “This is a Bull Market”:

Let’s again recap the dire warnings of a deadly combination of future low returns, along with high valuations that those in the finance and other experts have been extolling for years -The market has not cared about opinions.

Don’t take my word. I merely point you to the 10-year chart of Amazon (AMZN). The company that loses money year after year and whose P/E ratio is currently 290! The stock has only gained 2,500% in those ten years on the back of over-valuation and 20 years of not making money.

In reviewing global markets, you can see that it has been in a dominant momentum trend since August 2016, over a year now.  As you read back through our past quarterly newsletters, you will note that we have been writing that a significant upswing in the markets was very possible. Our call for growth over value in hindsight was remarkably prescient. 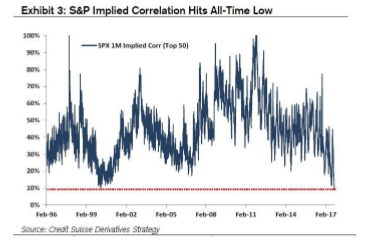 To illustrate my point, gains in the market have been relatively uneven in 2017, mainly when we review growth verse value along with market cap: Figure 2. 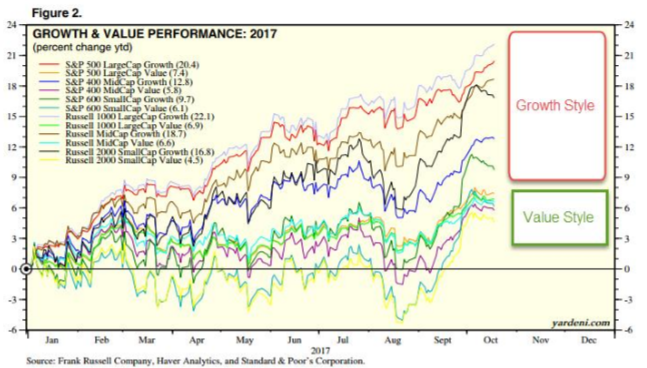 Growth stocks, regardless of market cap have been the best performing style in 2017.

Regarding sectors, the technology sector has contributed to more than half of the returns this year. This is not a surprise to us I outlined in the past why growth and technology would be the leader with a tailwind from stellar earnings, price momentum, tax reform, and most importantly “disruption” and “disintermediation.”

The market is climbing daily without regard to any potential future risks. It is as if risks do not exist while we know they do. The market is currently setting all kinds of historical firsts or things we have not seen in many decades.

 According to Ryan Detrick of LPL Financial. The CBOE Volatility Index (VIX) has averaged 11.54 in 2017 – it is lowest ever.

What we have is a classic momentum market. Yesterday’s market move is highly predictive of tomorrows, which in this case is up. The market has not cared about geopolitics (North Korea), or any other number of worries.  You were rewarded if you have ignored the news and followed price.

As a tactical manager, it is our jobs to assess the current trend and follow along.  Of course, the day will come when it ends, and I suspect that the drop could be abrupt. Pullbacks in ongoing bull markets are usually healthy. Moreover, allow for stocks to reset after considerable advances.

For the sake of balance let me point out what market bears and naysayers are worried about, which may or may not produce instability in the markets:

 Momentum unwinds, which are common throughout history.

Where to from here?

Of course, you always need a little luck to be on your side when it comes to being right as even the best only get it right half the time. You need to capitalize on your right calls enough to outweigh the plenty of times you will be wrong. I feel that we have now adequately capitalized on our fortunate luck. While I still believe that we are in a bull market over the intermediate and longterm, I am concerned about the run-up this last quarter on almost little to no draw-down (anomalies).

I have now raised cash across strategies, some more than others, and have been utilizing more defensive sectors.  I think that our favorite sector, technology, is vulnerable over the next few weeks during earnings season.  I believe that earnings may continue to remain strong, but some of our favorites may be priced a little too close to perfection, while also being somewhat of a crowded trade (hot money).

The global economy is in much better shape than what most were predicting at the beginning of the year.  Valuations might seem high but as I said last quarter the adjustment up to a higher valuation sounds like a reasonable argument.  If inflation can remain low, earnings good and with no signs of a recession on the horizon, I believe that markets can continue to work higher over the next 12 months even if a pullback happens. We continue to be on the lookout for the concerns that have been out there for years but have yet to transpire. For now, we will tread a little lighter than we have been and see how the market reacts to earnings season while being mindful that the path of least resistance continues to be up.