On October 30, 1974, two of the greatest boxers squared off in Zaire for the heavyweight championship. In a historic match that would be known as the “Rumble in the Jungle,” Muhammad Ali used a technique that would be called “rope-a-dope.” In the weeks leading up to the fight, a boxing photographer, George

Kalinsky, had suggested to Ali that he try a technique where he would look vulnerable on the ropes and allow Foreman to throw as many punches as he wanted but hit nothing but air. He told Ali, “Why don’t you try something like that? Sort of a dope on the ropes.” Ali successfully used the tactic, and Foreman spent his energy throwing punches without earning any points. That tired him, and Ali landed a series of punches in the eighth round that caused Foreman to hit the ground. The fight was stopped. The term rope-a-dope was coined soon after.

A series of negative news, over-bullish sentiment, interest rate moves, and inflation are wildly swinging haymakers at the stock market. The stock market is hoping to put on its best rope-a-dope move and avoid any punches being landed.  Bulls hope the bearish news and mood will exhaust itself and the market can mount a comeback, knocking down the bearish tone so it can resume the nine year bull market. This, of course, is what the hope is. However, this boxing match may not go as planned, and the rope-a-dope market may fail. The battle for bull or bear market is upon us and you must be ready.

Markets entered 2018 in a positive feedback loop and reached peak velocity in January. Since that time, the markets have abruptly reversed and are now caught in a volatile trading range. More data will need to be seen before it is known if January was a blow-off top or just a pause in this great nine-year bull market. J2 Capital is not surprised by the recent volatility, as our models were pointing to a possible large sudden break. We wrote about our concerns about a sudden break in our year-end newsletter.

The quarterly updates you read in the next few weeks will mostly be headlined with the same buzzwords: “Volatility Is Back”; “Inflation Scare”; “Tariffs”; “War Drums.” These are now known risks that we can see the markets reacting to daily; however, they are not the largest risks the market faces going forward, which by my estimation are being underappreciated and under discussed. The potential for a tail-risk event is now large: the worst market selloffs historically happen after markets are already weak. Are you and your clients in position to weather a potential bear market?

Recap of our previous quarterly update

We turned bullish on the market in August 2016 when we believed that many were sleeping on the coming upward earnings revisions and improving global economic backdrop. Most were late to the recognition of this, and thus were underinvested. The 4th quarter of 2018 saw performance-chasing by retail investors in an effort to play catch-up that ended with what may have been a blow-off top in tech stocks in January.

The news cycle has decidedly turned negative. Many will point to “headline risk” as the reason why the market is struggling, but don’t be fooled. Our internal data suggests that institutions and smart money were selling the recent recovery in early March just as many retail clients were going all in. J2 Capital became a little less enthusiastic about the market at year-end due to our internal indicators signaling overbullish market sentiment and a market rally in select sectors that was not sustainable.

We started to slowly raise cash in December, and then raised more into the February and March rallies. Many sectors were struggling in February and March, except for technology, which was holding up the broad indexes. I am now focused on larger risks that are brewing and that may portend more than just a pullback.

Since the beginning of the year, we have noticed a pattern occurring in the markets that would signal to us that institutions have been selling into the rallies. The selling started prior to the negative news flow, which is telling. This was also occurring while retail investors were getting more invested. Sold to you.

Institutional algorithmic program trading is also now dominant in the market, providing for many head fakes in sectors and industries. This is known as the whipsaw and is a trend-follower’s kryptonite. However, there are things that can be done to mitigate this. Experience tells me that it’s best to stay on the sidelines, as the environment is dangerous. Our short-term and intermediate-term outlook is cloudy, which is reasonable, given the market turbulence. As I will discuss, I don’t see any hurry for us to move away from our neutral and cash-heavy positions at the present moment.

Currently in my database, we follow around 60 sectors. At present, about 60% are below their 50-day moving average. Most that are above have a commodity theme to them. The higher-inflation theme continues to play out, but for how much longer? Switching to the 200-day moving average, the list of those below is smaller and here too the theme is inflation with defensives like Utilities and REITS underperforming. It appears bets are being placed that rates will continue to rise.

But no market conversation can happen without discussing technology stocks. They drive so much of the broad market returns these days. To start with, we are very concerned with the FANG stocks (Facebook, Apple, Amazon, Netflix)—namely Facebook. With the recent data snafu…er, sorry Zuck, I mean “breach of trust”…the concern is that growth forecasts have not come down nearly as much as they should.

I understand this industry well, as my spouse’s career is providing data to the Facebook platform. The business model has been damaged, though to what extent is to be seen. Attention on this matter has yet to effect Google (GOOGL), whose business model is similar. With possible regulation, and a negative mood around social media, growth forecasts should slow in the coming quarters. However, analysts haven’t budged off their estimates. Forty-two analysts cover Facebook: 37 have a buy and just two have a sell rating. Seems like revisions can only head in one direction? This is coming. How this impacts the rest of tech and thus the market will need to be watched.

We are also concerned with valuations in the other FANG members. I bring these companies up because so much of the market’s overall growth has come from them as of late. While it’s true that in the past I have argued for a higher market P/E than historical standards, I also think it’s a case of too much too soon, with a lot of weak hands holding the FANG stocks. Using Netflix as a thought exercise, the stock could correct 40% and by my technical standards still be in an uptrend.

Many other issues coming at the market all at once

There are two large risks being underappreciated at present: earnings forecasts and tighter money conditions. Tighter money conditions combined with interest rate normalization are not bullish items; liquidity is the blood of the market. Is it purely coincidental that the market is having issues now that the Fed is engaged in quantitative tightening? The chart below shows the Fed’s plans for reducing the size of its balance sheet: 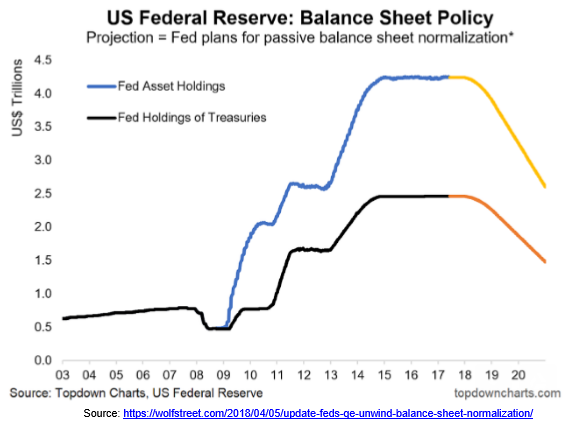 Investor risk appetite is also coming in substantially. Back in November, I wondered to myself if Bitcoin is also somehow correlated to technology stocks. It would seem that easy money and easy gains would lead retail novices to invest into the riskiest assets. It sure appears that there is some correlation here, offset by a couple of months. Should that pattern hold true, then the market has much further to fall. (Not a prediction.)

Recent economic numbers are also slowing. While not a trend, and very short-term in nature, this can be seen by the Citibank Global Economic Surprise, which has begun to come in under expectations. 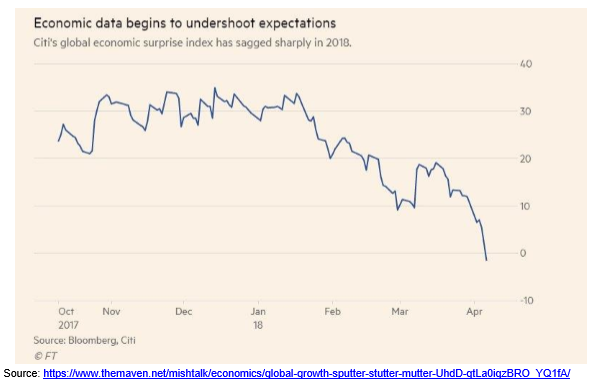 Global manufacturing PMIs are also turning lower which does happen when excess liquidity shrinks. This is another item not being discussed Should the trend continue, then the recent rise in interest rates is also over, and long bonds should benefit. This would align with my long-term view that interest rates and inflation have a ceiling lower than what most think. 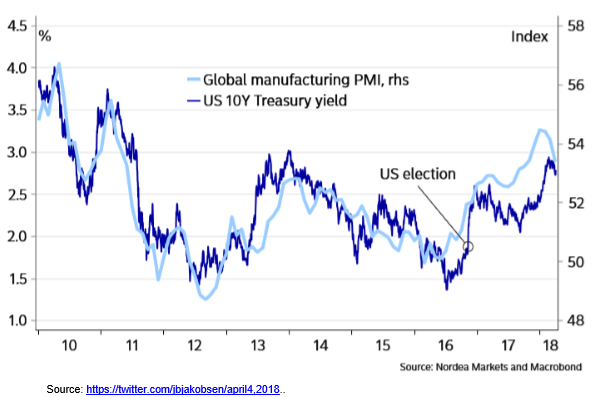 Lastly, I want to point out that earnings expectations are high here. It’s doubtful that earnings in the next few quarters will leap over the lofty projections that are being set. The environment is ripe for disappointment. Our models are currently showing that we are late in the earnings cycle. I will know much more about market valuations, and hence the intermediate-term outlook, in the next few weeks.

With tighter money conditions, middle east conflict, high valuations, over-bullish stock sentiment, soft economic data, the risk of a large negative event increases to a level higher than I am comfortable with.

The market is currently confusing, messy, and not optimal for risk-taking. Intuitional program trading is beating up those trying to play the wiggles. We have done well managing the recent volatility by being early to sell down to cash. We want to be careful to not overthink things and get caught up in chasing markets up and down daily. A better investment environment will present itself but it’s not now.

What you need to know is that we have a plan for you and your clients. In the short term, we want to find a balance between having some equity exposure but remaining more neutral and hedged until the market can sort itself out. We are willing to give up a few percentage points to the upside in the near term to make sure we are in a more favorable investment climate.

This will allow your clients to sleep well knowing that the risks have been accounted for already. This will also protect your book of business in case we haven’t seen new lows.

Again, we believe that the current best strategy for now is to stay neutral and manage risks for you and your clients.