The U.S. stock markets posted solid gains in the 1st quarter of 2017.  International and emerging market indices asserted relative strength during the quarter while the S&P 500 lead by a handful of tech companies helped pushed that index to all-time highs in early March.

As we wrote in our 4th Quarter 2016 piece, our expectation at the end of 2016 was for a continued market rally based on strong technical's that were occurring across markets and sectors.  So far, our analysis based on what the charts were telling us have turned out to be correct.

What so far, has not been correct in our analysis, was our call to see continued leadership in small and mid-cap growth asset classes.  Large cap, especially technology turned in the strongest performances in the 1st quarter.

Current Market And a Small Concern:

There is something that is bothering me with this market the past few weeks.  Small and mid-caps are losing significant momentum since the end of February.  As of this writing the Russell 2000 index is now negative for the year.  As shown in the chart below, the Russell 2000 is consolidating and been range bound all year after the upward surge from Trump's election night win. 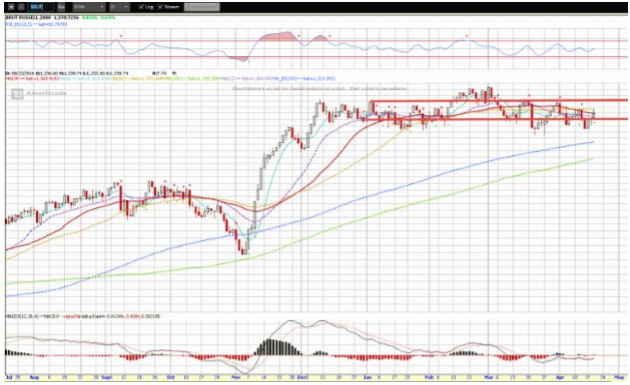 Two possibilities exist.  One is a bullish resolution that has small and mid-cap indexes powering out of this consolidation to take on leadership, like we expected at the end of 2016.  The second outcome is bearish and leads into a concern that is brewing.

From time to time J2 Capital has made mention of a proprietary volatility study that alerts us to potentially large price movements.  Direction is never 100% known ahead of time only that a coming large price movement in a certain index or market is potentially coming.  Over the years our success rate at identifying this move in advance is very high. This volatility-range expansion indicator is currently showing us that many small and mid-cap indexes are ready to move out of this consolidation phase with gusto.  There are some things that are slightly leading me to believe in the bullish resolution. However there are a few items that also can be viewed negatively, and thus bearish.  Government long bonds have caught a bid in recent weeks as have risk-off assets.  Both these areas look constructive at the present for more upside.  This would be a negative for stocks as a whole.  We would like to see the long bond and risk-off assets sell off in the coming weeks to feel better about a bullish outcome for equities.

The plan at this stage is to allow the market to show its new path, whether up or down and trade with it.  Due to the stalling momentum, and small concerns listed, J2 Capital has taken down some risk in many of its portfolios. We have increased cash across our strategies as we wait for the market to show us that it wants to continue the strong bull market run it started in the 4th quarter of 2016.